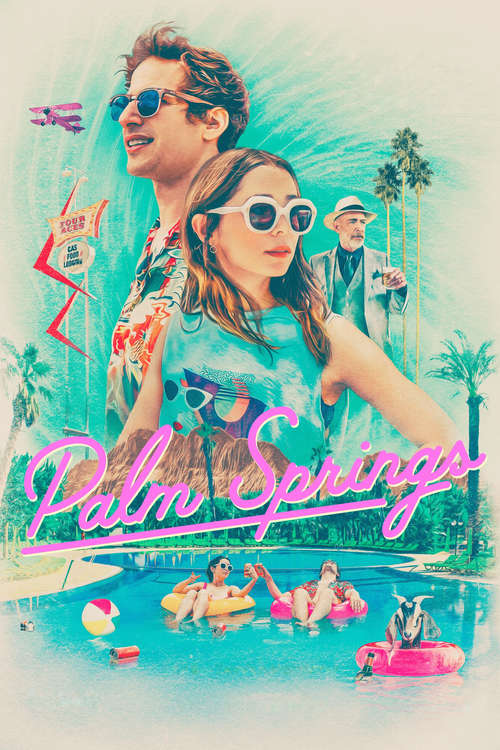 The Groundhog Day-esque time loop narrative has been a concept used throughout films over the years in a formulaic, mostly unoriginal fashion. Outside of the Bill Murray classic and Edge of Tomorrow, I usually don’t gravitate towards this sub-genre. After the film’s record-setting purchase at the Sundance Film Festival, ($17,500,000.69), I was quite curious about what was so unique about this film that led to that purchase. After six months of curiosity, I see now that Palm Springs was worth every penny. The film establishes itself as an honest, heartfelt, fresh, fun, and original look at the time loop trope.

Directed by Max Barbakow (his directorial debut), Palm Springs follows Nyles (Andy Samberg), a guest at a destination wedding. Nyles appears very relaxed about the events at the beginning of the film, even going as far as wearing a Hawaiian shirt and swim trunks in the very formal wedding setting. Ultimately, Nyles meets the bride’s sister, Sarah (Cristin Milioti), after saving her by giving her maid of honor speech when she finds herself unprepared. We soon find out what’s behind Nyles calm behavior. He’s repeating the same day, every day, and in an accidental turn of events, is taking Sarah with him.

Written by Andy Siara, Palm Springs examines the idea of time and what you would do with that time if you can change the events of your past and set in motion future events. The film’s originality is compelling throughout the film. As someone who’s watched these types of films in the past, I was programmed to think that the early events of the film would ultimately lead to Nyles repeating the same day. Barbakow breaks the mold by beginning the film with Nyles already in his time loop and letting the audience in on that slowly with the narrative.

The best and original choice Siara and Barbakow make is to keep this story fresh by having two people stuck in a loop together, rather than seeing events unfold from only one perspective. This choice allows us to watch the premise play out through two people – one who has become accustomed to the loop, and this is their routine and one who finds it terrifying and is trying to find a way out.

Samberg and Milioti are absolute standouts. Their chemistry is electric, which makes their characters’ cynicism and growth feel as though we are living through real people trapped in the Groundhog Day loop. It’s impossible to take your eyes off of them any moment they are together. It also highlights the conflicted feelings that emerge about the characters’ beneficial and possibly co-dependent relationship. I, for one, hope this leads to many more collaborations between the pair.

Palm Springs eerily works as a metaphor for the growth and establishment of relationships and the feeling the current pandemic has created – living life in a constant loop. It also teaches us that it’s up to the individual to make every day feel fresh and new.